It was part of the Five Pound Fringe, and was on at The Space Venue 53.

In the autumn following the Fringe, Helen & I recorded almost all the songs from the show, with me playing guitar & bass, and recording & mixing them all.

Initially released under the title of the show, Helen later bundled them with songs from her subsequent show, Songs For Modern Loving, and you can get them all here on her bandcamp. The songs I worked on are tracks 10-17. 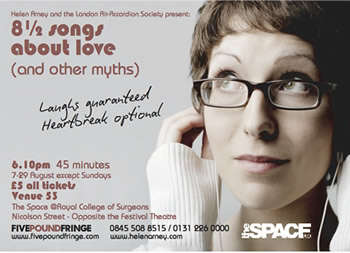