Starting at The Stand at the 2016 Edinburgh Fringe, as a work-in-progress, Content Provider opened officially back at London’s Leicester Square Theatre, after which, we then headed out on what would become Stew’s biggest tour to date.

Out across the UK & Ireland for the majority of 2017, including another 3 month run at Leicester Square that ran into 2018, we were back out at the start of 2018, filming the show at Southend On Sea’s Palace Theatre in April, before bringing the whole thing to an end at The Royal Festival Hall after 214 performances and countless piles of other comedians’ DVDs.

You can read press for the show here. And buy a DVD of the Southend recording here. 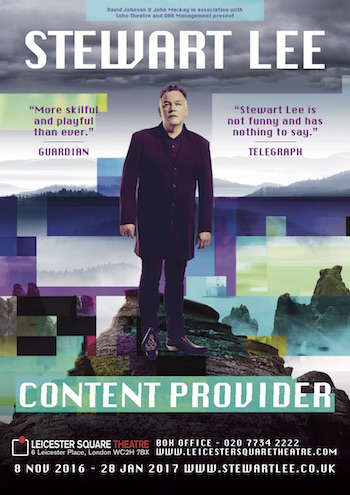